» News & events » News » What do I need to know about the Moderna vaccine? And how does it compare with Pfizer?

What do I need to know about the Moderna vaccine? And how does it compare with Pfizer?

Australia’s medical regulator has provisionally approved another COVID-19 vaccine, Moderna, for use in Australia.

Like Pfizer, Moderna is an mRNA vaccine. So how does it work, and what are the similarities and differences with Pfizer?

Remind me, how do mRNA vaccines work?

mRNA is a temporary genetic instruction that tells our cells to make a particular protein. It consists of a central portion with the genetic code for the protein and shorter portions either side that are important for the “readability” of the code.

The mRNA is wrapped in an oily coat that helps it enter our cells. The mRNA gets broken down quite quickly after it is delivered and used.

The Pfizer and Moderna vaccines were designed with the same goals and principles: to make an mRNA (genetic instruction) for the spike protein found on the surface of the SARS-CoV-2 virus (which causes COVID-19). 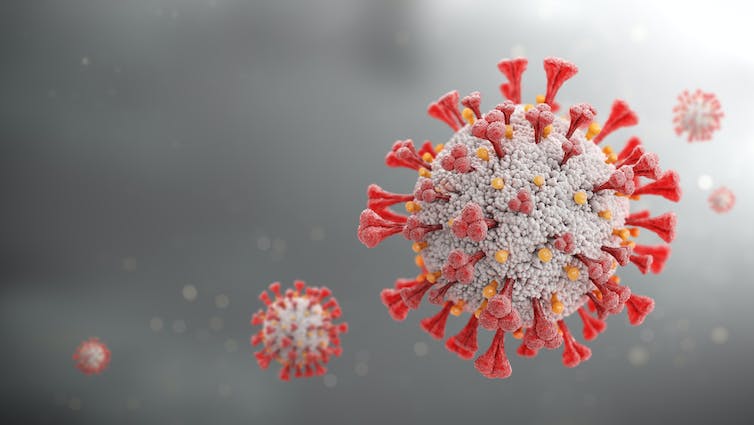 The SARS-CoV-2 virus is covered in spike proteins, shown here in red. Shutterstock

Body cells near the vaccine injection site will make the spike protein, display it on their surface and trigger the immune system to learn how to fight the actual virus if it encounters it.

Do Pfizer and Moderna work any differently?

The vaccines are remarkably similar overall, with just a few technical differences. The two mRNAs are based on the same chemistry and produce the same spike protein variant.

But the mRNA sequences differ in two ways: the exact “wording” of the genetic code for the spike protein; and the shorter portions outside the actual genetic code that determine its “readability”.

The two companies also use different oily coatings in their formulations.

How many doses for Moderna? And how far apart?

Despite their similarities, the Moderna doses have more than three times the amount of mRNA material (100 micrograms), compared to Pfizer (30 micrograms).

The dose spacing is also different: three weeks apart for Pfizer and four weeks for Moderna.

Alternatively, given the great urgency of developing and trialling the vaccines, it’s also plausible both manufacturers ran out of time to fully test different formulations and timelines, and simply went with the amounts and spacing that produced the desired results.

How effective is Moderna at preventing COVID-19?

Newer studies based on real-world data of millions of vaccinated people in many countries have shown Moderna and Pfizer vaccines are:

The Moderna vaccine has been approved for emergency use in many countries including the United States, many European Union countries, Canada, the United Kingdom, Israel and India, among others.

Several studies, only some of which have been peer-reviewed, indicate both Pfizer and Moderna vaccines are highly effective against the Delta variant, although there is a slight reduction compared to the original viral strain.

Are there any side effects?

Both vaccines have some side effects common to most vaccines, including some soreness at the injection site, fatigue and headaches.

These conditions are more common in young men and are generally treatable and not fatal; most patients make a swift recovery.

For both Moderna and Pfizer vaccines the rates of anaphylaxis (extreme allergic reaction) are similar, and extremely low (two to four cases per million).

How long does the immunity last?

Moderna recently announced no change in efficacy six months after participants received their COVID-19 vaccines, with a 93% protection against severe disease after six months, compared to 94% reported in the clinical trial.

Pfizer has reported similar data, with protection sitting at 84% after six months.

No longer term effectiveness studies have been possible, as the wide-scale vaccine rollout only commenced at the end of 2020.

What about storage and transport?

Moderna requires a -50°C to -15°C range during transport and long-term storage (until the expiration date is reached) and this can be achieved with standard freezers.

How much Moderna is coming to Australia?

Moderna is approved for use in adults aged 18 and over. Australia’s medicines regulator, the Therapeutic Goods Administration (TGA) is currently reviewing an application from Moderna to approve the vaccine’s use in children aged 12 and over.

Prime Minister Scott Morrison says planning is underway for Moderna vaccines to be rolled out through approved pharmacies and other providers from September, after the government receives advice from its immunisation advisory group ATAGI.

Ten million Moderna doses will arrive during 2021: one million in the second half of September and nine million doses due by December.

That compares with plans to roll out four million Pfizer doses in September, ten million in November and six million in December.

Next year, 15 million Moderna doses are due to arrive; these will be reserved as booster shots. A further 60 million Pfizer doses will also be available in 2022.

It’s likely Australians in eligible groups will be offered either Moderna or Pfizer and given their similarities, it really doesn’t matter which one you have – they’re both very effective.

This article is republished from The Conversation under a Creative Commons license. Read the original article.